“We found Cyrus wandering in a field full of cactus. He was pretty beat up. Our guess is he was used as a bait dog or a hog dog . He had lots of open and infected wounds and was half starved and dehydrated, covered in ticks and cactus all over. He really looked bad and I really didn’t think he would make it. We gave fluids and cleaned him up. The vet gave us meds and every day he just got a little stronger. He shied away from men for a while, but I would have my nephews come up and take him out. He really didn’t like their ball caps. No one would ask about him, and the longer he was here the closer I got to him. We worked on a few commands. “Stay” is a hard one for him! lol… I do hope you enjoy him as much as I did. Oh and by the way, his nickname was “Serious” because he always had a serious scowl on his face. So the name ‘Cyrus” was chosen because we thought it was a strong willed name with determination, which is how we see him…“- Gail Yarborough

Since then, he found residence at Stephens County Animal Shelter, Breckenridge, Texas. Four of his siblings were sent out to fosters, but being black “pit” …he was an “undesirable.” He spent many months there at the shelter under the loving care of their faculty. My sister Cris saw this post from Tammy who shared his photo from the shelter and he caught my eye…. (the beauty of shares)

After corresponding with Kathy at Stephens, he was scheduled for transport to VA………. (so we thought).

CYRUS tested positive for heart worms and could NOT be transported. We were heart broken as were all involved with him…. This poor furbaby had so many hardships that to give up on him now would have been a sin.

He was given the green light for treatment as long as he had a home to go to, and as far as I was concerned HE WAS MY CYRUS.

During and after the treatment he needed a foster to watch him.  That’s when he was fostered for close to three months by two people who I can never repay… Dana and Burrell McKelvain who watched him recover.  And being that Dana is a retired nurse, I knew he was in great hands. I received photos often and he looked so happy riding around in his Kubota sitting shotgun.

* here are some photos from the McKelvains in Texas* 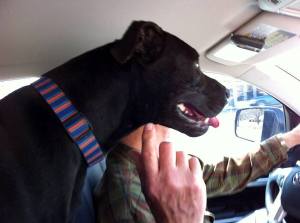 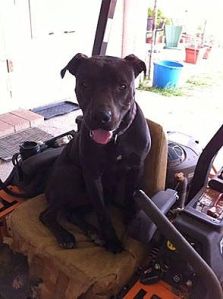 So for nearly 10 weeks he was in treatment, a very aggressive treatment, a treatment in which he was restricted from ANY activity 24/7. AND TRUST ME !!!! THE MCKELVAINS HAD THEIR WORK CUT OUT FOR THEM ‘CAUSE THIS BOY IS FULL THROTTLE ALL THE TIME!! GOD BLESS HIS HEART.

In mid-May 2014 CYRUS tested negative for heartworms and was scheduled for transport from TX to VA on May,23. I’d love to share some photos of his arrival to Virginia… it was a truly emotional day. 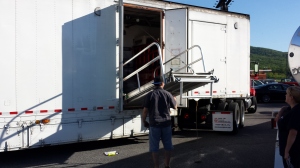 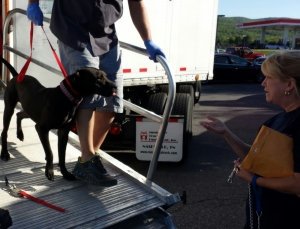 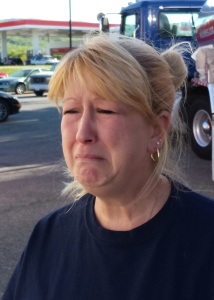 Happy to be out of the truck… (I know the feeling!)

Soooooooo many people were involved with CYRUS’s success story that to name them all would be impossible… Thank you Ty Harrell Tillman for your help and Quana Campbell who donated her valuable time to take CYRUS from shelter to transport.

As of Nov 15 CY CY is still heartworm free and living the Doggie dream… “We all are grateful for each others part in this beautiful ending.” 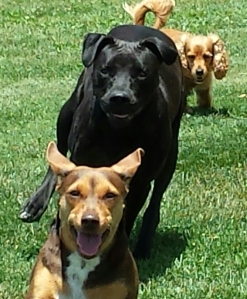 Winter originally came to me as a client from the Breckenridge shelter,who needed help with dog aggression issues. She was a real hard egg to crack, not only had she become dog aggressive, she had severe separation anxiety, and noise phobias that needed to be addressed if she was to be successfully adopted.

Winter responded to behavioral modification and coaching well, and eventually was placed in what we all hoped would be her forever home. Sadly, that adoption did not work out and Winter actually came back to us worse than when she left. Not wanting the progress that we had originally seen to be completely undone, we decided to continue her rehabilitation in our home.

I told my wife and son, that Winter would be a real challenge and that if we were going to save her that it would have to be “All hands on deck”. With the whole family in agreement, and with a huge amount of support from the shelter staff (Shout out to Ty Tillman) we started the next chapter in Winter’s journey, not knowing quite where this all would lead. The next few months would turn out to be challenging to say the least. As if often the case with shelter dogs, her behavior actually got worse. After several thousand dollars of damaged property and much angst and consternation on our part Winter thankfully turned the corner, and realized that no matter what she did or didn’t do, she was not going to be abandoned again, no way-no how!

As you might have guessed, we decided to adopt Winter into our already full pack of two German Shepherds and two cats (all rescues). What has happened to Winter and to us, has been nothing short of astounding! Once Winter understood that she was safe and loved, her destructive behaviors stopped, and she is now much more comfortable in her own skin. She is also no longer dog-aggressive,even when pushed. She is now one of the gentlest dogs I’ve ever been a guardian to, and I know I speak for the whole family, when I say our lives are enriched beyond measure by her presence!

As a Certified Professional Dog Trainer, Winter has shown me in a very personal way the value of staying the course, regardless of the obstacles I encounter both professionally, and in my life in general. Thank you Winter and all of you at the shelter for making such a difference in the lives you touch.

Now if I could just find a way to reduce her shedding!

My dogs Trigger and Dexter both came from the Stephens County Animal Welfare Center.  They are beautiful and wonderful and both bring joy to my life every day! 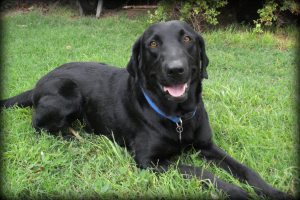 I grew up with and have always had dogs, and after losing two of my senior dogs in one year, I knew it was time for another best friend.  Trigger had been at the shelter for several months after being picked up as a stray in Breckenridge.  For some reason he had been overlooked all this time which is a mystery to me because he is a beautiful dog with a loving and fun personality!  Trigger came to live with us Christmas of 2012, and what a blessing he was to me and my remaining older dog! 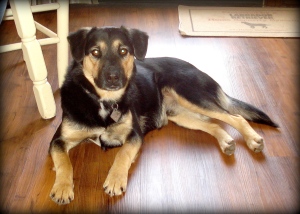 About a year later, another little dog named Dexter was returned to the shelter because his adoption didn’t work out.  His adoptive family had concerns about his disposition, so Dexter was moved into a foster home for evaluation.  I happened to know his foster family, and one day they told me about this little guy who needed a second chance.  I trusted their opinion about his sweet nature and decided to give him a try – besides, I’m a sucker for dogs who are down on their luck, and I reasoned that Trigger could use a buddy his own age!  Dexter came to live with us Thanksgiving of 2013, and he and Trigger have become best buddies!  They do everything together – play, roughhouse, explore, snuggle…  They even love my cat (and she loves them too)!

I am so grateful that the Stephens County Humane Society gave my boys a chance.  Both would probably have been doomed in a kill shelter, destined to die unwanted and unloved.  SCHS gave Trigger the time he needed for “his person” to find him, and they worked hard to give Dexter a fair evaluation.  We have a happy little pack now because of the fine people at SCHS and the work they do – thank you, Thank You, THANK YOU from all of us!!! 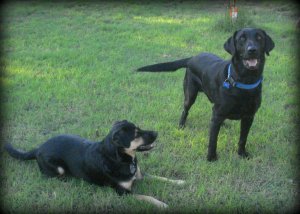 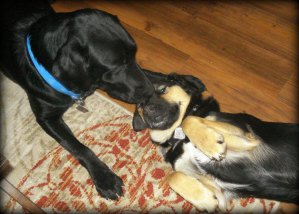 What type of pet are you looking for?

Our Partners and Volunteers